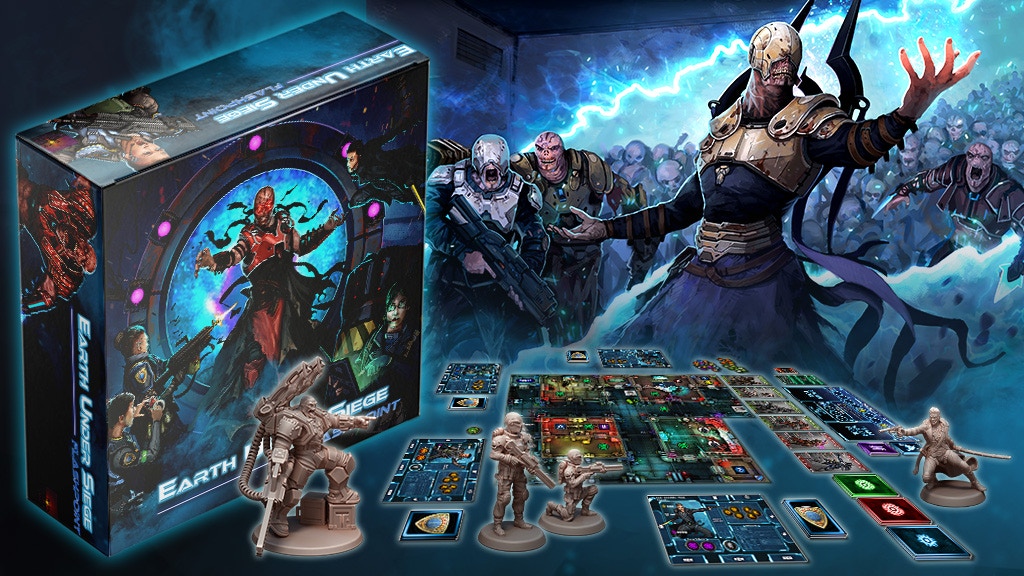 With this stretch goal we unlock two new Enemy figures for every backer! An additional Reaver and an additional Vormacht Heavy! Having extra figures is always useful, because if you ever need to spawn an Enemy and you don’t have enough figures, you have to spawn a unit of the next highest initiative!

Let’s take a closer look at each of these Enemies! First up, we have the Vormacht Heavy. The Heavy is a real tank, especially for a Basic Enemy, and provides unique problems that have to be dealt with. Their Spawn cards focus around either making them tougher, or making them a direct threat immediately by placing them in Overwatch which can allow them to make an attack against Operatives even before the Enemy Phase begins. And their attack cannot be overlooked because it has the Spray trait which means it hits all figures in the target's zone, plus each figure in the zones between the target and the attacker! Poor play here can result in multiple members of your team getting damaged. On the Defense side of things, their Phase Shield ability prevents players from using rerolls when targeting them, which takes away a huge tool in the Operative’s arsenal. Luckily, they only have a 4 Defense, so they aren’t too hard to hit…unless they are in cover, which can happen due to one of their Spawn Events (Enemies in cover receive +2 Defense).

Next, let’s look at the terrifying Reaver. You won’t encounter these in your first few missions, but when you do, you will learn to be careful with your tactics when dealing with them. Not only are they frightening melee attackers that inflict Bleed with their hits (bleeding figures suffer 2 damage at the end of their activation), but they have a “Ready for Violence” ability that will activate them when they are attacked and survive! That means they will move up to their movement speed to engage the nearest Operative, then attack if able! What that means is that when you attack a Reaver, you better either kill it, stun it, or be more than 3 zones away, otherwise you’re in for some up close and personal contact with a raging alien!

Next up, we have a boost for our Operatives! At $100,000 we get to expand our Tactical options…Stay tuned!

In the shadow of death...

“Like a nightmare of metal and horror the Warbringer wades into battle, looming over all like the shadow of death. With each step it fills the air around it with lethal firepower, swinging its terrifying weapon in sweeping arcs, driving its enemies into cover as they cower from the endless hail of fire. Bodies crunch underfoot as it moves unrelentingly forward, always forward, shrugging off enemy attacks as if they were nothing. Whole squads have fallen to a single Warbringer, both those who made a valiant last stand, and those that fled and were cut down from behind. All are fodder before the Warbringer as it moves mercilessly forward, always forward…”

With this unlock, each backer will receive all of the components necessary to include the fearsome Warbringer in their games, including two miniatures, an Enemy stat card, and three Spawn cards.

Warbringers are terrifying Enemies to face with a brutal attack that targets all Operatives in Line of sight as it sweeps its weapon all around it creating a field of fire that is almost impossible to hide from. Add to that the Warbringers armored defenses that can be difficult for any Operative to deal with, and you have a monstrous opponent that may be better to run from than fight!

Next up, two more figures lurk in the shadows waiting for unsuspecting backers to unlock them! What could they be? We’ll find out when we reach $80,000!

We did it!  Thank you everyone!

Wow! What a ride! After that rough start on Tuesday I wasn’t sure what to expect, but all of you stuck with us and came through! You have no idea how much that means to me, honestly, I can’t adequately put it into words.  You are all amazing, and now I hope we can keep the excitement going and smash through some stretch goals!